You can be blessed by the god at any point in the game. Complementing the sacrifice players have the option of receiving their favorite buff.
The type of blessing is randomly generated.

[...] For many centuries, priests who still believed in the old gods have made sacrifices of the most precious goods in the world in honor of Xanthus,
​ so that he may experience at least a moment of blissful peace. In an act of grace, Xanthus blesses the people of Iris as a token of gratitude for the memory of his fate. 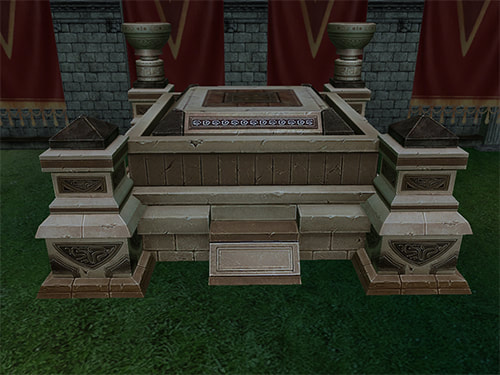 A shrine was built in honor of Xanthus and can be found in the southern part of Randol. 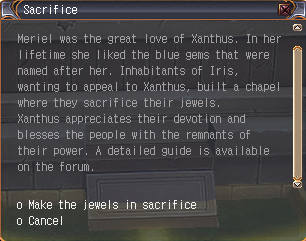 After clicking on the shrine, you will see a window briefly presenting its genesis 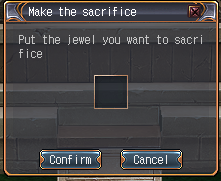 To make the sacrifice, drag Meriel's jewels from the backpack to the window above. 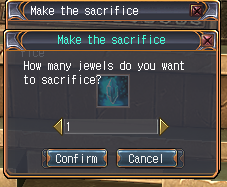 The only thing left to do is enter the amount that we want to spend on this noble cause and confirm with the OK button.

At this point, Xanthus accepted the sacrifice and the gem pool increased.
Whether or not players are blessed depends on their size.
Below is an explanation of how the system works.

Each channel has a separate pool needed to fill it.
The size of the pool is randomly selected for each blessing and ranges from 20 to 50 gems. It is unknown to anyone,
so it is difficult to predict when the buffs will be cast.
It does not matter whether the player sacrifices a larger amount at a time, or donates multiple pieces of valuable crystals for this purpose.
The blessing will take place when the required pool is reached and will be announced with an appropriate message.
The 3 different buffs that make up them are randomly selected from the list below:

Additionally, if the pool was 35 or more crystals, a Time Blessing will be cast before each buff (doubling the buff's duration).
Gems in excess of the current pool will be donated to the next pool.

They also need to be crafted using special recipes. You'll find them at the Scroll Trader Gerel.
The craftsmen in Randol will teach you the useful skills necessary for this purpose.

The first 4 skills have 3 levels, while the last one has 1 level Depending on your skill level,
the chance of successfully producing a material is:
10% at 1 Lv
45% at 2 Lv
83% at 3 Lv
The exception is the Divine Gift, which gives you a 100% chance for lvl 1.
Wspierane przez